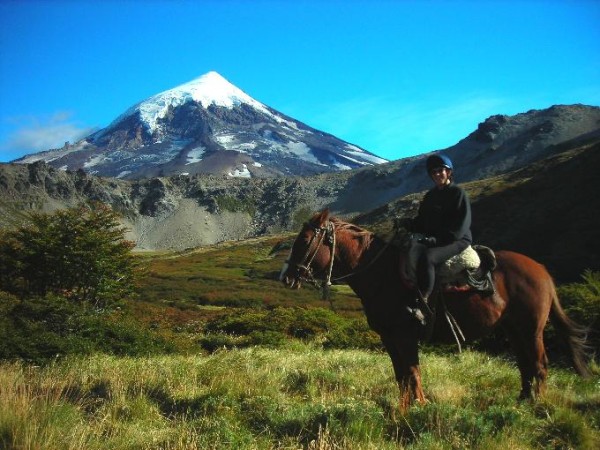 An estancia in northern Argentine Patagonia in the foothills of the Andes. Fun and fast riding in a spectacular location. Gallop across water meadows and try your hand at helping the gauchos as they work cattle.

Estancia Huechahue covers 15,000 acres and supports 900 head of Hereford cattle. Some 400 acres are under irrigation where alfalfa is grown for hay and there are also orchards of plums, peaches, nectarines, apricots, apples, walnuts, hazelnuts and almonds.

The estancia prides itself on its self-sufficiency whether in the form of fruit, nuts, vegetables or electricity! Beef is home-produced and during the week you have the opportunity to enjoy at least one “asado” – a traditional Argentine barbeque lunch.

The riding is limitless. Setting out from the estancia, ride through barren rolling hills and along the narrow rocky gorges of Andean streams or take a ride to the Chenque Hills where the mighty Andes rise up behind you and the vastness of Patagonia stretches out before you. Watch the condors and eagles as they float high above you. Ride across water meadows or visit burial caves where Indian drawings can still be seen on the walls or try your hand at working cattle with the gauchos.

See www.inthesaddle.com for all our riding holidays in South America and rest of the world.

The programme can vary, but below is a example of a week’s riding from the Estancia. In September, October, November, March and April, the condors are particularly spectacular. Lunches next to the river with the chance to swim are best in January and February.

You will be met at Bariloche airport and driven to Estancia Huechahue (approx. 2 hours 30 mins). After lunch there will be an afternoon ride. A chance to familiarise yourself with the horses and tack and the local riding style.

A full day ride on Estancia Huechahue. Follow the Huechahue stream through its basalt canyons, riding as fast as you want across the water-meadows sending the plovers and ibis screeching, before returning over the top of Chenque Hill, where the Andes rise up behind you and the vastness of Patagonia stretches out before you.

Spend the day with the gauchos rounding up cattle into the corrals. Lunch may be with the gauchos and could be strips of beef ribs threaded onto a stick and cooked over the open fire. You cut off the chunk you fancy and eat it sandwich style. Meat, bread and mate – the gaucho diet. After a siesta in the shade you will get the chance to separate the cows on horseback or try your hand with a lasso.

A full day ride on Estancia Huechahue to visit the Indian burial caves. The caves were formed when the glaciers carved the valley opening an entrance to the lava flow tunnels formed during  previous eras of volcanic activity. The Tehuelche Indians laid out their dead, surrounded by their weapons and always somewhere where they could see their enemies coming. They decorated the walls with designs. The remains have disappeared, but the petroglyphs and the view are still there.

A morning ride to see the stallion with the mares and new foals and a chance to herd horses. After a late lunch an evening ride to the cliffs where the condors and eagles nest. While you have a cocktail and the sun goes down, the condors return soaring above and below you before settling for the night.

A day ride through the neighbouring Indian reservation. The saddle rugs and saddle bags on Huechahue are woven by some of the Indian women and the skins from Huechahue cattle are worked into rawhide and then bridles and halters by the men. Ride by and share a “mate” on the way through.

A full day ride to a different part of the Estancia. There are 15,000 acres in all so there is still plenty left to explore. Lunch on the river. On the way home a chance to see guanaco, deer, wild boar and”peludos” – the baby armadillo.

A farewell ride on Huechahue before transferring to the airport.

In northern Argentine Patagonia in the foothills of the Andes. Nearest airports are Bariloche and Chapelco (San Martin de los Andes).

View this location in a larger map

September to November is spring time when days are warm although it will be cold at night. Summer is December through to February when day time temperatures may rise to 30C. Autumn is March to April.

The bulk of the rain falls between May and July when the Estancia is closed, although because you are in the mountains you do need to be prepared for rain at any time.

Reviews from In The Saddles guests: Guest reviews